Every physics student needs to handle rulers, thermometers, calipers, voltmeters the list is long and does not begin with computers and data logging. However the data logging technology available now, lends itself to the creation of unique educational experiences.

In January 1998 in the Physics Teacher, a US magazine, sonic rangers were evaluated. In 2015 some teachers have still not used one which is a shame. They can be difficult to set up and patience is required to get noise free data. Data-logging has moved a long way since 1998 and there is a lot more on offer these days.

If you have ever struggled to get noise free position time data from a dynamics experiment using an ultrasonic ranger, then the Vernier Motion Encoder system is the product is for you. Two optical bar code sensors are used on a dynamics cart, to read a 4mm period bar code attached to the track. The signal produced can be processed to give cart position data to 1mm resolution and this claim checks out. The data collection rate is optimised at sampling rates of 15-30 Hz but I collected good data at 10Hz and it’s not too noisy at 50 Hz. The data is sent on an IR beam to a detector at the end of the track. The signal can then be further processed using LabQuest 2 and its LabQuest app or logger pro on a PC or Mac, to produce motion graphs.

Fig1 Braking distance comparison of sonic ranger and motion encoder. The sonic detector was positioned at opposite end of track not as shown.

I used the encoder system to produce data from two experiments that I use in my physics teaching. I compared the performance of the encoder system to that of the sonic ranger, without fussing too much about how I set up the ranger for data collection. Fig 2 shows the result of a typical run. In this experiment I am using the Graphical Analysis app on an ipad linked wirelessly to a LabQuest 2. The data is shared for discussion using an Apple TV in the class room. More on this in a moment. 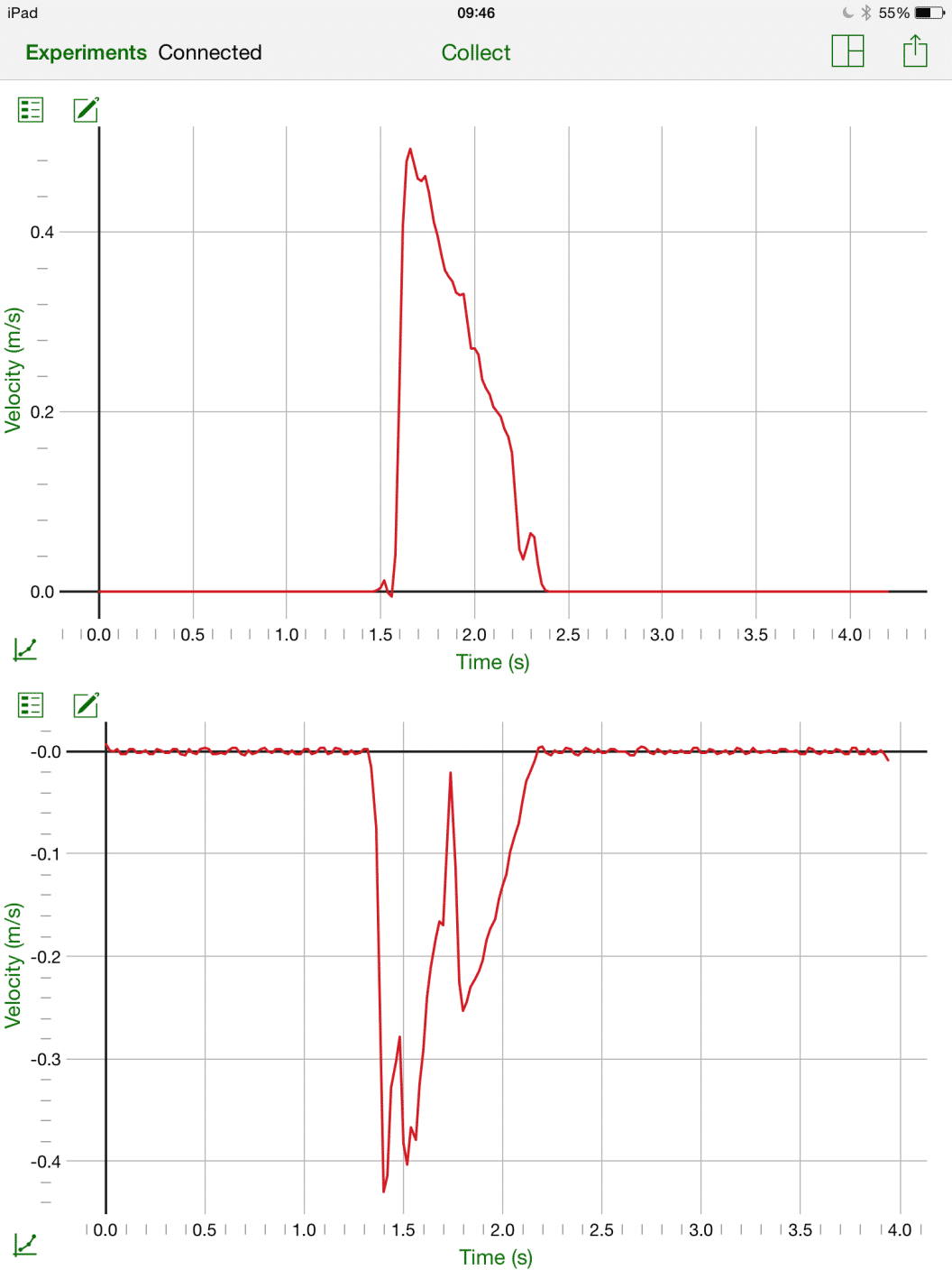 The cart rolls down the lane and encounters the braking system. I like to get data, which I refer to as shark fins, for analysis. The encoder produced a fin straight away and I can do better with a sonic ranger, but it takes time and care to do that. Not necessarily a bad thing some would say, but sometimes in a busy class room you want as close to plug and play as possible! The encoder system does give you that.

The nice thing about data logging, when its high quality data logging, is that your class can sometimes notice features in an experiment that you have not planned to discuss! Then you get some great physics teaching done. I want to take as my second example an experiment to show that the acceleration of a cart rolling freely up and down a plane is constant, In fact I noticed this example is used on the Vernier website to shown off the encoder system in its full glory. I set this for a class to study using rangers and they pointed out that the velocity time graphed is kinked if the incline is not too steep! See fig 3. 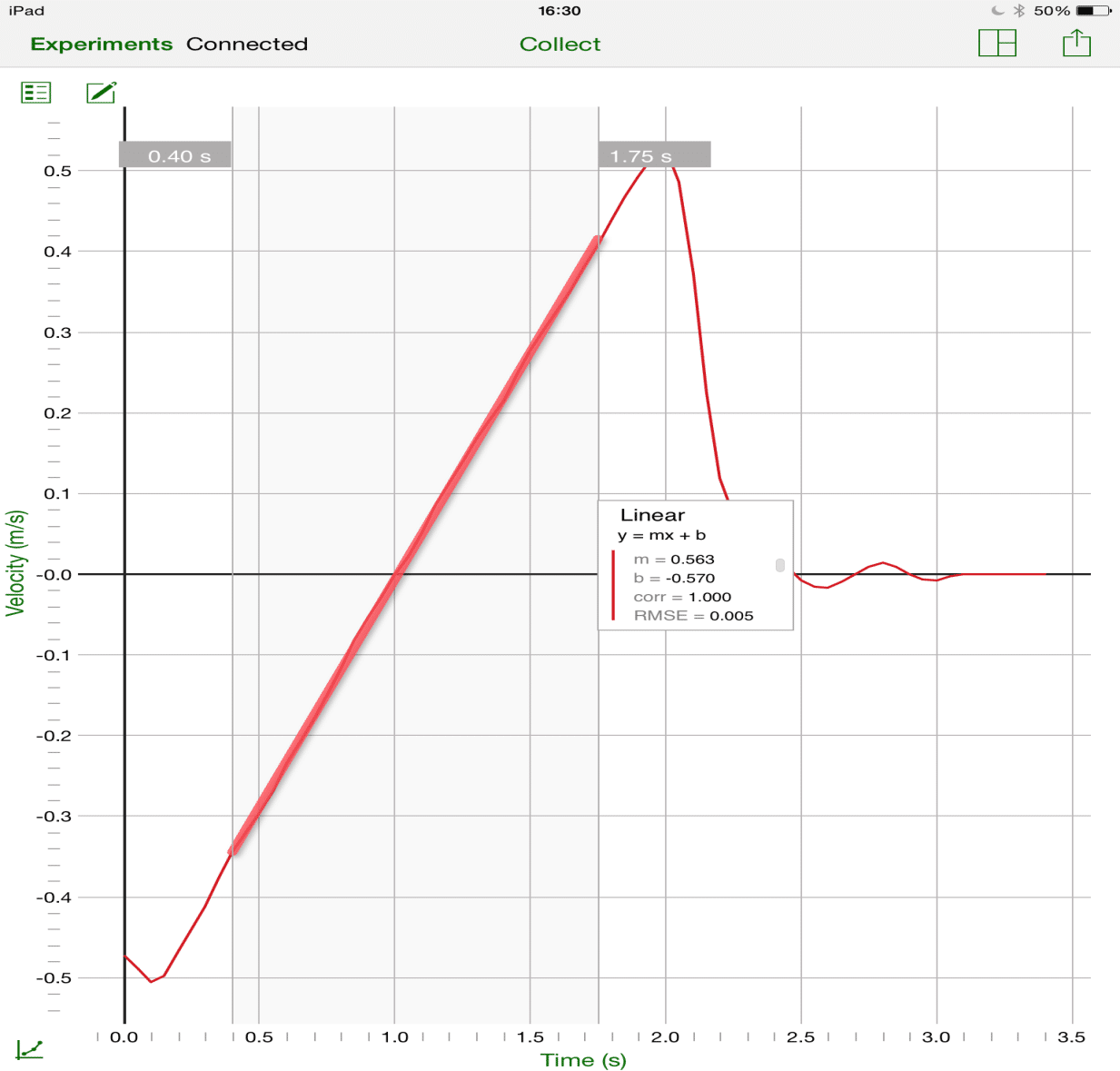 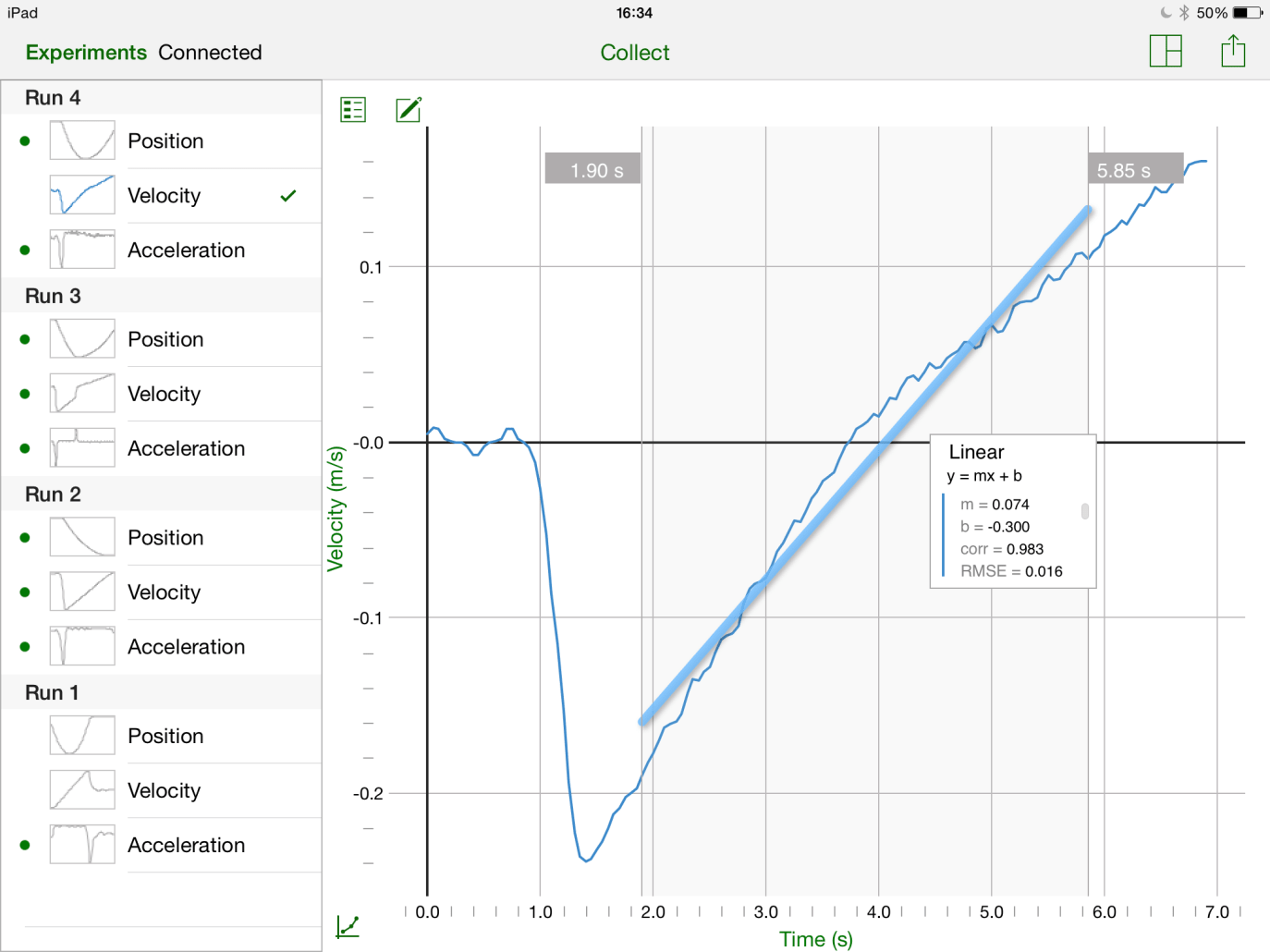 So this was the scenario. My class was able to see each other’s data because of wireless technology. This is particularly easy using the Lab Quest 2 interface, but there are other manufacturers offering alternatives. So with a few interfaces and wireless technology, the whole class can be involved with discussion and analysis. This is an important point to make, as teachers often criticise data logging as expensive, so only small amounts of kit can be purchased. Therefore classes crowd around a screen and watch clever software create a story with little involvement from the student. This need no longer be the case and certainly Vernier equipment is able to share data wirelessly. In my class I could pull up data from around the room wirelessly and show what was happening in several small groups. The kinked graph was there and needed explaining. But also we were able to see the kinked graph disappear as the angle of incline was increased. Real data was driving the lesson, how science works in action. Each group was producing the same story as a pattern of data.

Using LabQuest 2 as the interface for the motion encoder, you can open the data in an app like Explain Everything. This is a screen casting app. It allows the students to annotate graphs collected from the experiment and make an audio commentary as they discuss the data. It really pushes the pupil to think about what the graphs are saying. Then in the case of our kinked graph above come up with an explanation using Newton’s Laws. All their thoughts with the data, is collected as a video file, produced by the app, which can be shared easily.

The motion encoder system with LabQuest2 interface is a powerful tool to have in your physics lab. It allows student and teacher to collect noise free position time data in a plug and play way. You will still need a video system for 2D motion, but the Vernier Video Physics app is excellent in this role. Getting to know a little more about wireless technology and the apps available can transform a classroom, even one with a few data logging interfaces, into a very exciting physics education environment.

For Details of the Motion Encoder please see here 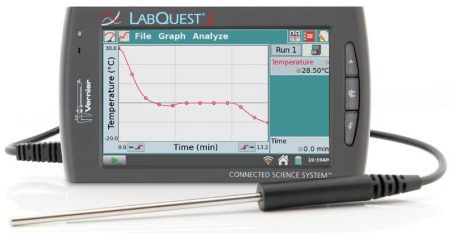 Vernier LabQuest2
The Labquest 2 has been discontinued please see the New and improved Labquest 3 We are pleased to present the most powerful and intuitive data logger for science education. Ideal for enquiry based learning  with hands-on science in your classroom or in the field. Can be used as a standalone device or as a computer interface with our award-winning Logger Pro software. Created with today's classroom in mind you will love its high-resolution screen, responsiveness and ease of use. And, of course, because it was developed by Vernier, it is backed by comprehensive curricula, a generous warranty and legendary support.
Read more

Go!Motion
Use your Go!Motion sensor to collect the position, velocity and acceleration data of moving objects. Setting up an experiment and collecting the data could not be easier than with the Vernier Go!Motion. Just connect it directly to your computer or Chromebook USB port and start getting real-time motion data right away.
£168.00 ex VAT | £201.60 Inc VAT Add to basket 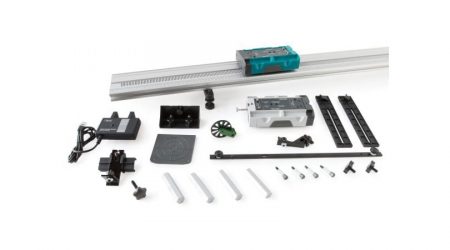